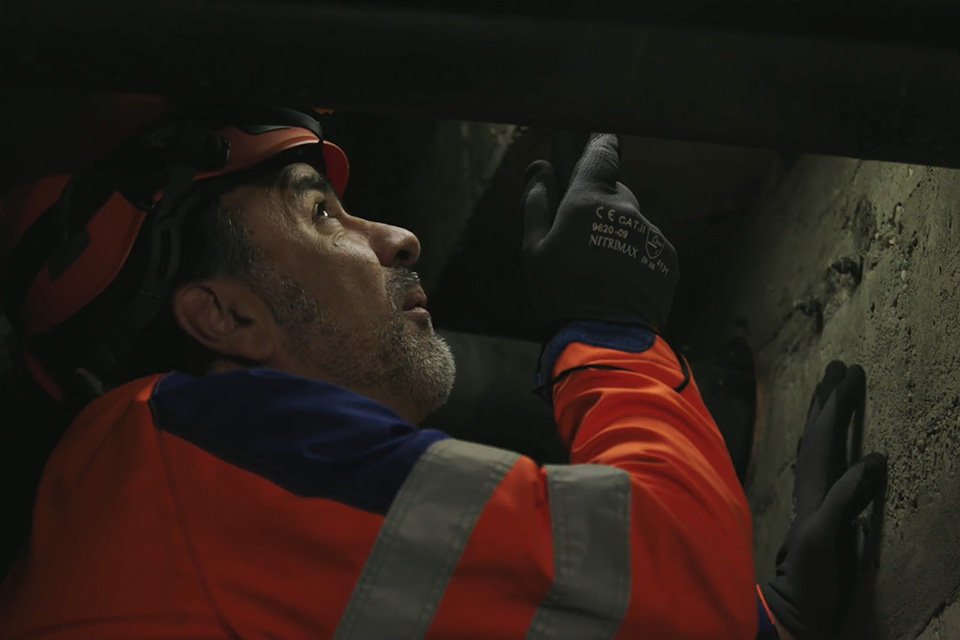 A Quick Film Production Insight Behind the Scenes

Filming a series of 7 employee videos for NSNW.
Wait, for whom?

First, thanks Dani from Pomcanys for choosing to work with us!

Every Swiss person driving a car, will latest know the term ‘NSNW’ after watching one of our clips we produced for them. Wanna bet?

Below I (Urs) try to give you a quick peek behind the scenes of what a small/medium shoot looks like.

#1 Pre Production
The key to a successful production, is the stuff happening before we start rigging up and run out to shoot; Getting to know the client and the topic, their needs, listening to the agency involved, studying the client’s CI/CD, casually dropping in some ideas and wait out the reaction and, what we do most brilliantly, brainstorm! Let those ideas, as crazy as they might be, find their way out of the involved personell’s head and wander to paper. Or iPhone, depending in which decade you’re born in.

Towards the end of pre production, we start writing scripts, a storyboard and at last the call sheets, involving set locations, contact details of crew, weather forecasts, etc. mailing them out to all personell on the project. Like spam, but essential to let everybody know who/where/when/what.

#2 Production
Now it’s time to pack-up that gear. Charge batteries. Clean lenses.
Load the van, top up the crew with coffee & French croissants and head out on the Swiss motorway to the 1st location of the day, at times most souls are still sound asleep.

Arriving on location, meeting up with… well, with the people on the call sheet, whereas most of them you have only ‘met’ over email or on a video-call or two, realising that they are very friendly. At that point you know that the day is going to be a good one and the caffein starts kicking in.

And it’s lunch. Time flies when filming, is it being on the set as a Runner or Director, every one included is in hers/his role and plays the game, sometimes loosing track of time.
But let’s not get megalomaniac here, as on >90% of the productions we run, we are a crew of only 3 to 5, so we always keep the overview. On the NSNW shoot it was the core crew of 3; Alex, Gian-Luca and me, Urs. We work like clockwork, and clocks Swiss like.
Alex and me on the camera, Gian-Luca on the mic, as well as assisting on various occasions.

And it’s night. Yes, time does fly. Wrap day 1. Tired, happy. Pack-up, load van, stopp at a restaurant, home.
It told you up in the title it’s going to be just a quick insight.

#3 Post Production
4 filming-days later out in the wild (or on this occasion “The Swiss Northwestern Highways”), filming in 4K 25 to 50 fps 10-12 bit RAW, we accumulated heavy footage. 6TB. That’s 6’000’000’000 Kilobyte (for the ones stuck in the ‘floppy era’).
Now double that, as we need to make mirror back-ups (RAID5 in our case) back at the studio.
We need a lot of storage space to keep up with the people, products and random stuff we film every other week.

Pre-Editing; After listening through 100’s of stock soundtracks, sending through a selection to the agency/client, it’s time to fire up the Editing Machine…
.
.
.
…and first install the latest updates of Adobe CC. Or should I? Will it work? Or will it freeze 27 times a day… again?
Ok, ingesting the data, sorting through footage for hours, discover some funny behaving people in the background of scenes every now and then which haven’t been noticed during the shoot.
Filling that timeline.
Underlining with selected music pieces and sound effects.
Animations.
See which clips match. Create short stories within the main story choosing 3 to 5 matching scenes. Establisher shot, wide, American, full body, close-up. Fixed, moving, pan-shot, … The more footage we shoot, the harder it is to choose, but the more freedom we have in playing around.

If you haven’t watched 1, 2, or all 7 of the NSNW Job Series Clips, here’s what NSNW stands for: “Nationalstrassen Nordwestschweiz”, meaning “National roads in northwestern Switzerland”.

At this point I want to state that working with the team of NSNW was a great pleasure, you guys really are all cool dudes and girls. Thank you!

Here’s my favourite 1 of the 7 clips we produced –>